A pioneering new lifeline service connecting vulnerable people to crisis support services has been launched in Mid and East Antrim.

The vital scheme, the first of its kind in Northern Ireland, helps those suffering from drug and alcohol abuse, and their families.

Special cards, designed to be carried in wallets and purses, feature emergency numbers which act as central points of contact when specialist help and intervention is needed.

The blue light signposting cards have been circulated to frontline workers, including police, firefighters, paramedics and counsellors, and gives them a hotline to potentially lifesaving drug and alcohol support services in Mid and East Antrim.

The confidential networks of Start360, Ascert, Voices and Extern are highlighted on the cards, along with their contact numbers and the support they provide.

Start360/Ascert provide an intervention service for young people aged from just 11 to 25, whereas the Extern number is available to victims of adult substance abuse.

A dedicated Start360/Voices hotline number caters for those suffering from hidden harm. It is aimed at children, young people and families of parental substance abuse.

She added: “Start360’s Northern Drugs and Alcohol Coordination Team Connections Service was pleased to have played a key role in the organisation, design and launch of the blue light information cards.

“Increasing awareness of drug and alcohol support among emergency service staff will benefit their knowledge and the outcomes for service users.

“Start360 firmly believes in the benefits of partnership working and we look forward to continuing this good relationship with our vital emergency services and the PCSP in future.”

Start360 is Northern Ireland’s leading provider of support services to young people, adult offenders and families in the community.

It offers a range of services and interventions in the areas of health, justice and employability.

The card hotline initiative was developed by the Mid and East Antrim Policing and Community Safety Partnership Drug and Alcohol Steering Group, which identified needs and gaps in service areas across the Borough.

All of the organisations involved have a vital role to play in addressing drug and alcohol misuse.

The immediate response provided through the cards could prove critical in an emergency if a member of our community is in urgent need of help, and draws on the expertise of statutory, voluntary and community sectors.

For more information on the scheme or the work undertaken by Mid and East Antrim PCSP: 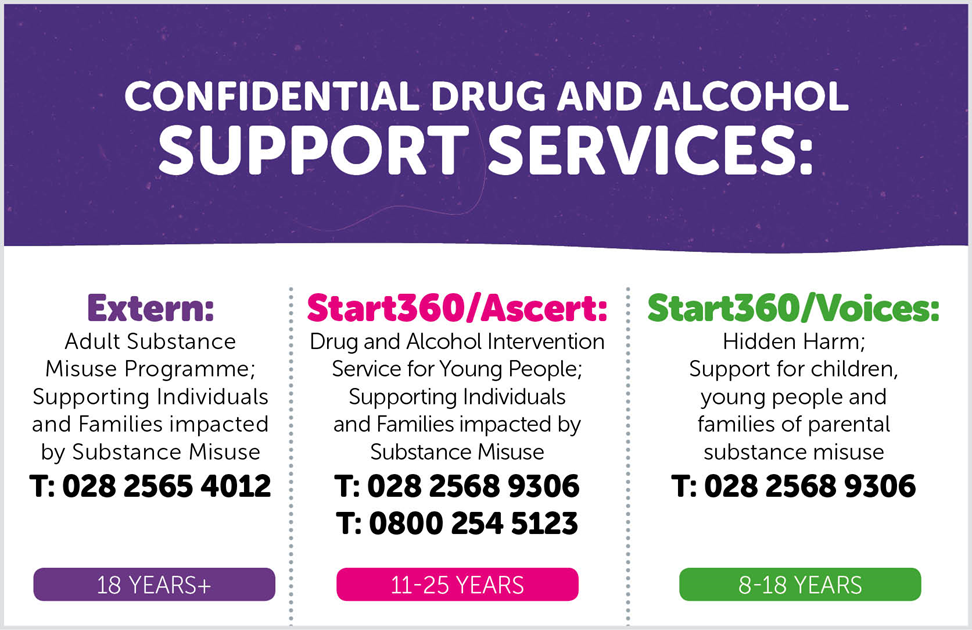