The MV Princess Victoria IV was launched in 1946 and entered service in 1947. She was built on the Clyde by Wm. Denny & Bros, Dumbarton, and was the fourth vessel of that name to sail the Larne to Stranraer route. The Princess Victoria was a purpose-built car ferry with a capacity for 1500 passengers, 40 vehicles and cargo.

On 31 January 1953 the Princess Victoria set sail from Stranraer at 0745hrs under the command of Captain James Ferguson. There is some debate, but it is thought that the ship was carrying 127 passengers and 49 crew members. Bad weather was causing chaos across Scotland and Northern Ireland. The weather may have resulted in the Princess Victoria altering her course, in line with procedures followed by ferries in northerly and north westerly wind conditions. It appears that Captain Ferguson decided to return to Loch Ryan due to the extreme weather. Unfortunately huge waves burst the stern doors and flooded the car deck. Crew tried to close the doors but they were too badly damaged and water continued to flood the ship. As a result, it was impossible to return to the shelter of Loch Ryan. Captain Ferguson made the difficult decision to proceed to Northern Ireland, and hoped-for safety.

The MV Princess Victoria started to list to starboard. The first distress call was made at 0946hrs, “Hove-to off mouth of Loch Ryan. Vessel not under command. Urgent assistance of tugs required". At 1032hrs an SOS was sent as the ship was now in immediate danger, “Princess Victoria four miles north west of Corsewall. Car Deck flooded. Heavy list to starboard. Require immediate assistance. Ship not under command.” At 1252hrs the starboard engine room was flooded and at 1308hrs David Broadbent, the ship’s radio officer, sent a Morse code message, “On her beam end”. Seven minutes later at 1315hrs the message was received, “We are preparing to abandon Ship”. At 1335hrs the ship signalled that they could see the Irish coast. They were now positioned 5 miles off the Copeland Islands. At 1358hrs the last transmission was received and it is thought this is the time at which the ship keeled over.

The adverse weather conditions hampered the rescue and caused confusion regarding the location of the Princess Victoria. The ship was reported as 5 miles north west of Corsewall point, however, she was drawing ever closer to the coast of Northern Ireland.

On receiving the initial SOS, the Jeanie Spiers lifeboat was dispatched from Portpatrick, alongside the HMS Contest. However poor visibility prevented them from seeing the Princess Victoria.

It wasn’t until 1335hrs when the new position of the ship was transmitted that the rescue attempt was able to focus its efforts. Four merchant ships located in Belfast Lough set out immediately; the cattle ship Lairdsmoor, the trawler Eastcotes, the coastal oil tanker Pass of Drumochter and the coastal cargo ship Orchy.

The horrendous conditions prevented the assisting ships from rescuing survivors in lifeboats, due to the danger of dashing them against the sides of the large vessels. Instead they provided shelter from the raging sea, until the Sir Samuel Kelly lifeboat from Donaghadee arrived.

At 1531hrs the RAF Hastings arrived at the scene, dropping equipment to survivors and guiding the HMS Contest to the scene. The RAF Hastings had been based at Aldergrove that day but just after 1000hrs had left to assist with rescues off Lewis and Barra.

Captains of merchant ships involved in the rescue, James Kelly of Carnlough, Captain of the Pass of Drumochter, James Alexander Bell of the Lairdsmoor, David Brewster of the Eastcotes and Hugh Angus of Orchy were all made members of the Order of the British Empire. Lieutenant Commander Stanley Lawrence McArdle and Chief Petty Officer Wilfred Warren of HMS Contest were both awarded the George Medal for diving into the water to help survivors. 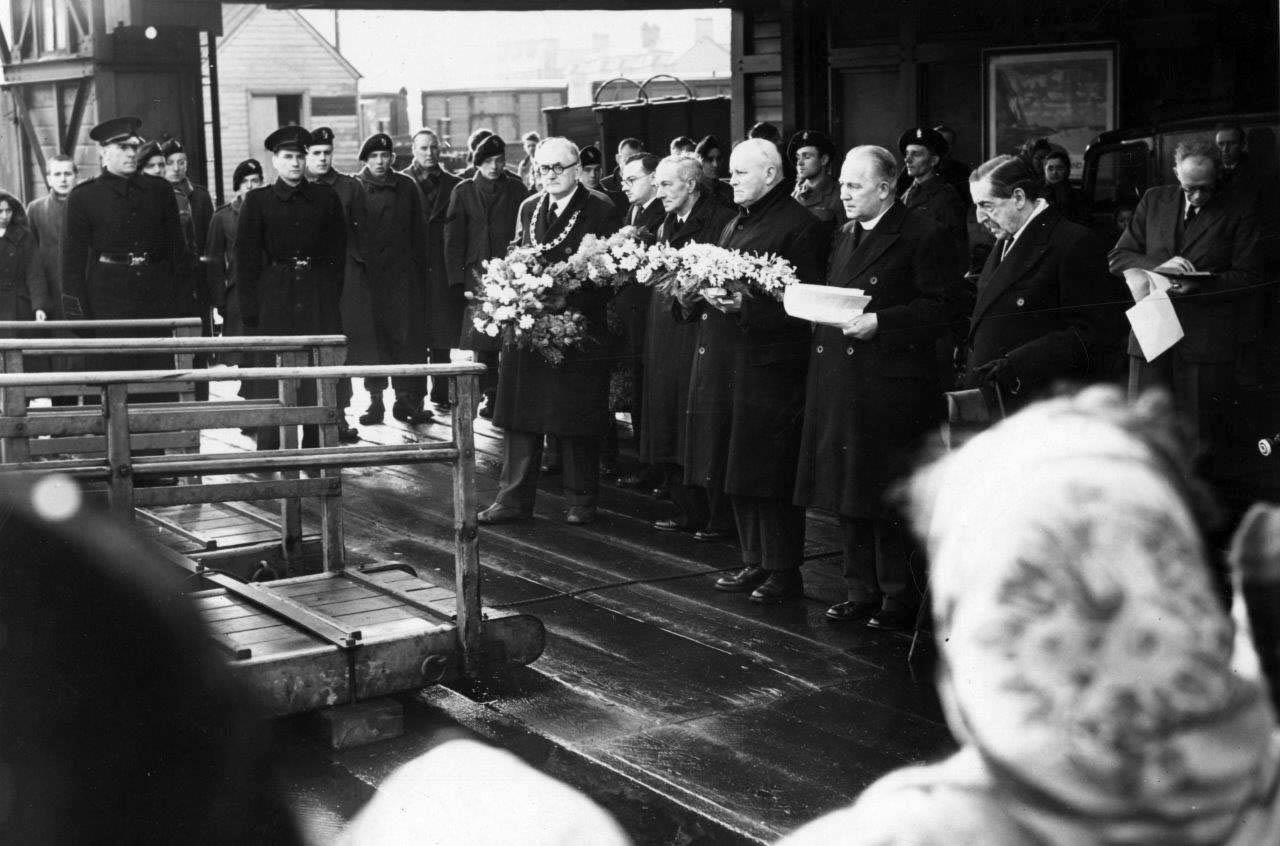 The day after the tragedy, Larne was a town in mourning.

“So many of her sons and daughters, as well as friends who have for so long and often walked her streets perished when the Princess Victoria foundered so near to home shores on Saturday afternoon.  Even at a late hour many in the town could not believe that the Victoria had gone, although from 11 o’clock in the morning reports were coming in that she was in difficulties.”  Larne Times, Thursday, February 5, 1953.

The MV Princess Victoria Disaster is considered to be one of worst peacetime maritime disasters. As was usual for ferries, no passenger manifest was kept so it is not possible to state with certainty how many people were on board when she set sail that morning. It is thought that some 176 people were on board including 49 crew members and that the disaster claimed the lives of 134 people. This had a huge impact on Larne with 27 of the victims coming from the town. Among the dead were the Deputy Prime Minister of Northern Ireland, Major JM Sinclair, and MP for North Down, Lt Col Sir Walter Smiles. All women and children on board the ship were lost.

Large crowds attended the funerals of those who were lost.Thousands lined the streets of Larne for the funeral of Miss Roseann Baxter, one of the stewardesses on board the Princess Victoria.

Following the tragic loss of the MV Princess Victoria, The Princess Victoria Distress Fund was set up by committees in Larne and Stranraer, for the aid and relief of widows, children and other dependents of those who lost their lives; and for the aid and relief of the passengers and crew who were rescued when the ship foundered. Generous subscriptions from individuals and businesses both locally and province wide, in addition to fund raising events in dance halls, at community gatherings and social functions raised the fund to over £44,000.

A court of inquiry held at the Crumlin Road Courthouse, Belfast in March 1953 concluded; "If the Princess Victoria had been as staunch as those who manned her, then all would have been well and the disaster averted."

1953 - The First Memorial Service
The first memorial service was held on Sunday 5 February, 1953 in memoriam of those who were lost. The service took place at the Princess Victoria berth and was broadcast by the BBC to a vast crowd of mourners.
Since then the loss of the MV Princess Victoria has been commemorated annually in Larne and Stranraer. In Larne a small service is held and wreaths are laid at the memorial on Chaine Memorial Road.

1980 - New Memorial Unveiled
The Princess Victoria Memorial at Chaine Memorial Road, Larne, was completed in September 1980. Money for the memorial was raised by public subscription through an appeal by Larne Borough Council.  The stone is granite with a bronze inscription plate donated by Kane’s Foundry, Larne, and the anchor was donated by Larne Harbour Ltd.

Also to mark the 50th anniversary, Mr Gerben Bouma made a scale model of the MV Princess Victoria. This model was purchased by Larne Borough Council with the aid of funding from the Northern Ireland Museums Council Specimen Purchase Fund.

2008 – 55th Anniversary
In 2008 Larne Borough Council and Dumfries and Galloway Council commissioned a special piece of music by composer and musician Ivan Black. It was performed live for the first time on 31 January 2008, by the East Antrim Accordion Orchestra.

2013 – 60th Anniversary
A painting of the MV Princess Victoria by Chris Gilbert was unveiled to mark the 60th anniversary of her loss. This was purchased through Larne Borough Council.

This text comes from an exhibition to mark the 60th anniversary of this tragic disaster which left Larne and the wider community mourning for those who were lost.

It is without doubt that future generations will continue to remember the MV Princess Victoria, the devastating loss of life, the valiant efforts of its crew and the bravery and courage displayed by all those involved in the rescue operation.