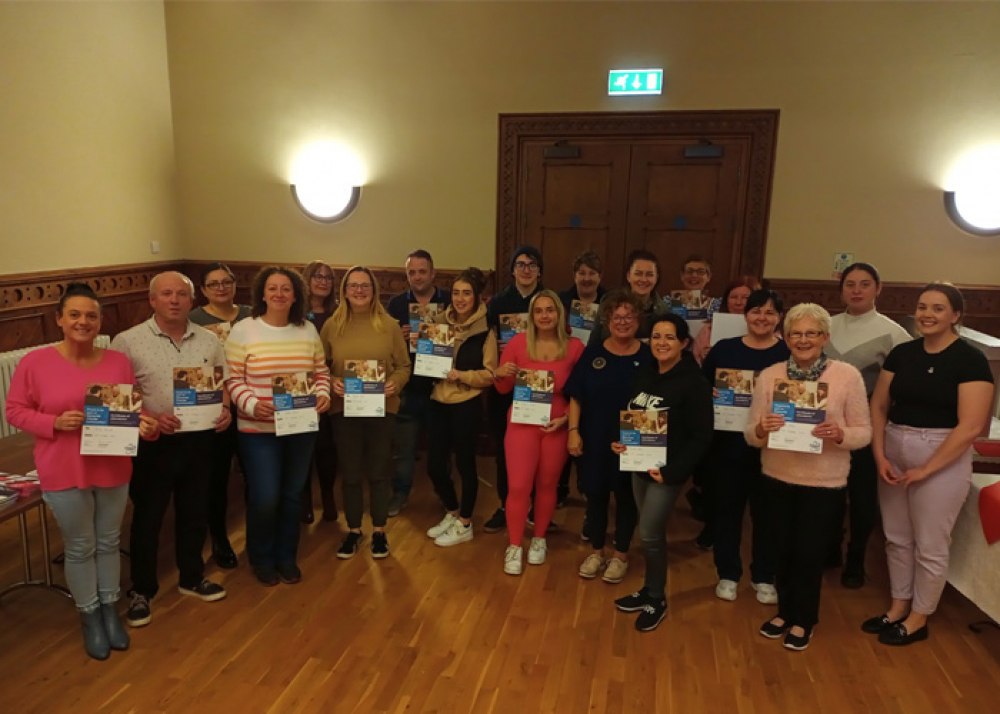 Three ‘Dementia Friendly Communities’ training sessions were delivered by the Alzheimer’s Society in Larne, Ballymena and Carrickfergus, with 83 people completing the training and becoming ‘Dementia Friends’.

One participant commented, “This was a very informative training session, providing much-needed awareness in the community. The trainer delivered this with great enthusiasm and understanding. I feel confident to be engaged with people with Dementia and their carers.”

Another attendee stated, “This course was very informative and has enabled me to be more compassionate towards people living with Dementia.”

Those attending the training each night, learned about the different types and symptoms of dementia as well as communication tips and environmental considerations to assist someone with dementia. Mid and East Antrim Borough Council also provided attendees with packs which included invaluable information and signposting to local support services in the community that offer support to people with dementia and their carers.

The ‘Dementia Friendly Communities’ awareness training was delivered as part of an ongoing strategic priority to respond to an ageing population, listed within Mid and East Antrim’s Community Plan - ‘Putting People First’.

Council’s Dementia Champion, Ald Gerardine Mulvenna said: “I am absolutely thrilled and incredibly touched by the dedication that has been shown from our residents in wanting to support people living with dementia across the Borough. It is through this individual care and devotion, that Mid and East Antrim is recognised as an inclusive and ‘Dementia Friendly’ Borough, where people living with dementia and their carers, can come to feel welcome, safe and understood.”

“Expanding on this work continues to be a high priority for us and I’d encourage all businesses and organisations across Mid and East Antrim to get in touch to arrange dementia awareness training for their members and staff.”

Julie Morton, Dementia Friendly Communities Officer for Alzheimer’s Society added: “I am delighted at the turnout across the 3 evenings in Larne, Ballymena and Carrick. The conversations had, the questions asked and the stories shared, just prove how important it is that dementia remains a priority for Mid and East Antrim Borough Council. I feel all participants left feeling they were not on their own and knowing where to turn to for information and support at any stage, should they need it."

If you would like to enquire about hosting ‘Dementia Friendly Communities’ awareness training for your organisation, please get in touch with Amanda Cotter, District Electoral Area Officer, on 028 2563 3196 or amanda.cotter@midandeastantrim.gov.uk.