Ahoghill in Bloom was formally presented with a Silver Birch tree as part of the Queen’s Green Canopy ‘Tree of Trees’ initiative - in honour of Her Late Majesty Queen Elizabeth II. 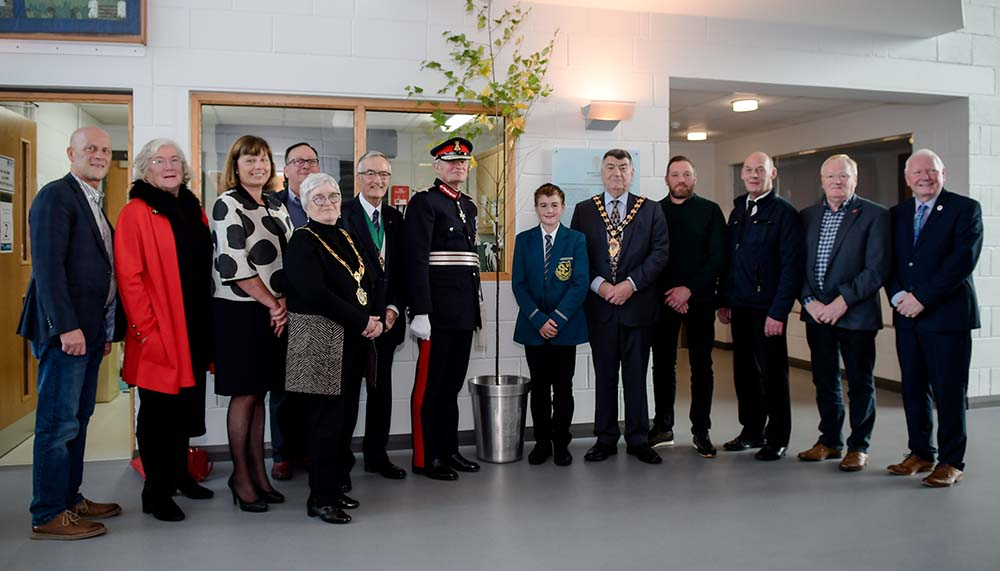 On Thursday 20 October His Majesty’s Lord-Lieutenant for the County of Antrim, Mr David McCorkell presented the native tree to members of the Ahoghill in Bloom group, in a pot embossed with Her Majesty’s cypher.

Over 90 people packed Ahoghill Community Centre and were addressed by the Mayor of Mid and East Antrim, Alderman Noel Williams, and Wallace Elder from the Ahoghill in Bloom Group. Mr James Perry acted as Master of Ceremonies during the event.

Mayor of Mid and East Antrim, Alderman Noel Williams, said: “I am delighted Ahoghill in Bloom has been chosen as a site for planting a special Queen’s Green Canopy (QGC) tree to celebrate Queen Elizabeth II’s Platinum Jubilee.

“I am encouraged to see the support this amazing group have in the village. They work so hard in the local community, bringing many benefits to residents in and around the area and this accolade is thoroughly well-deserved.”

The inspirational group joins over 300 organisations from across the UK who were recently announced by the Queen’s Green Canopy as recipients of these special trees, which were gifted as part of the Platinum Jubilee weekend celebrations.

The tree becomes part of the living legacy in honour of Her late Majesty, joining over a million trees already planted across the UK as part of the initiative.

James Perry from Ahoghill in Bloom said: “The 'In Bloom' team is delighted that Ahoghill has received one of the special native trees along with the embossed pot from the ‘Tree of Trees’ in London. The tree will be planted in our community garden and the pot with Her Late Majesty’s cypher will be on permanent display in the community centre adjacent to an interpretive panel.

“The village is one of only 14 Northern Ireland recipients of a 'Tree of Trees' and this is testament to the dedication of our volunteers - and also the support received from residents, businesses and other local organisations. The tree will act as a focal point for the village and remind us all of our collective efforts in ensuring Ahoghill is welcoming and looks its best.”

The Queen’s Green Canopy tree planting initiative was created to mark Her Majesty’s Platinum Jubilee. It has now been extended to the end of the planting season in March 2023, to give people an opportunity to plant trees in honour of Queen Elizabeth II.